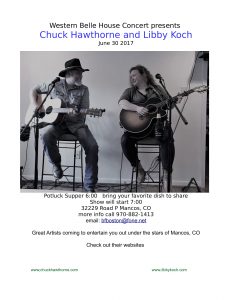 On July 26th, Austin songwriter Chuck Hawthorne will release the follow up to his critically acclaimed 2015 debut, Silver Line…the long awaited full length album, Fire Out of Stone. Stories of Hawthorne’s military career and his chance meeting with Silver Line producer Ray Bonneville may have originally drawn listeners to his music, but songwriting enthusiasts worldwide soon recognized the powerful strength of the songs and voice of Chuck Hawthorne. Since his emergence in the songwriting world, Chuck has toured non-stop in the US and Europe. Winning over audiences everywhere he goes, he has built a solid, loyal fan base and a reputation as a “songwriter’s songwriter.” He has truly found his voice as a performing artist, which has been fully and flawlessly captured in Fire Out Of Stone.

Libby Koch’s gospel-grounded and honky-tonk voice powerfully navigates the emotions inherent in an album about relationships, starting with the opening break-up trio, “Just Move On,” “You Don’t Live Here Anymore” and “Out of My Misery” — three diverse, retro-to-modern songs that ultimately convey more about the triumph of empowerment than the pain of loss. Tracked live with veteran players handpicked by VornDick, the album, her fourth, is a fine follow-up to her 2014 release, Tennessee Colony, which drew on her ancestors’ stories to address themes of family, faith and home. Calling it “a frisky blend of country, folk, bluegrass and gospel set to some mighty fine fiddle, banjo and mandolin” and labeling it “daisy fresh,” the Houston Press put Tennessee Colony on its year-end top 10 list.